Chinese developers are shifting their focus to lower-density residential development and site purchases, according to a report by Knight Frank, and in line with "feng shui" predictions for the lunar new year.

More than 40 per cent of sites acquired by Chinese-backed groups last year were for low-density homes compared with 29 per cent in 2017.

Chinese groups have also diversified their investments in Australia with more acquisitions of office towers offering strong passive income as they ride out the downturn in the housing market. 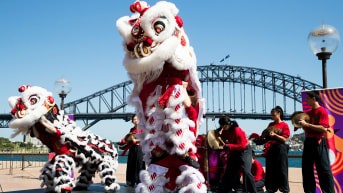 The slowing housing market also means the total value of Chinese-backed investments has fallen to $1.3 billion in 2018 from $2.02 billion in 2017. In both years Chinese buyers maintained their presence in the market, acquiring about a third of the total development site sales nationally.

"From the Chinese government attempting to moderate capital outflow, to locally, the impact when major domestic banks restricted lending to offshore borrowers ... all of this has had an impact on Chinese outbound investment," Knight Frank head of residential research Australia, Michelle Ciesielski, said.

As the new lunar year kicks in on Tuesday, Sydney feng shui master Mina Zheng, from Feng Shui Australia, said the year ahead would not bode well for high-rise apartment developers particularly in luxury units, whereas those focusing on low to medium-value homes further away from the CBD would make profits.

"For those who are looking to make a quick buck, this year is not the right time," she said. "Developers should focus on projects far from the city and even look at non-residential projects like aged care and retirement villages.

"But cash flows will be better this year, as the money element, which was absent last year, is quite strong in this year of the pig."

The spirit of Ms Zheng's advice may already be evident in the recent strategy adopted by major developers including Aqualand, Aoyuan, Zone Q and Poly Australia. 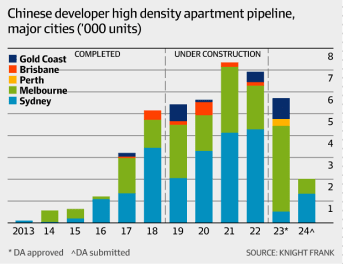 Besides feng shui, Knight Frank Head of Asian Markets Dominic Ong said the majority of Chinese developers were settling in for the long haul through long-term diversification.

The outlook for apartments was bleak generally, with many projects expected to be put on ice, Ms Ciesielski said.

"Projects submitted for development approval and those already with approval, but not yet having started marketing campaigns, tend to taper off substantially for Chinese developers – with less than 6 per cent of total projects in the pipeline," she said.

House price slide continues, but analysts say the end is nigh